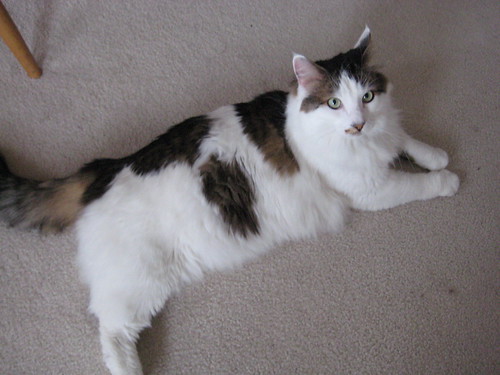 I met Drannor yesterday morning when I was at the cat shelter for my volunteer shift. Now, I've been looking for a second cat for awhile, and volunteering at the shelter has been my nefarious plan to have an excuse to meet the adoptable cats every week while also helping out. And I've met plenty of great cats, though none who have met all my criteria for adoption.

In particular, I have had the problem of falling for sweet, cuddly kitties ... who were also at least 10 years old, and thus, while they would be fine companions for me, they would be less fine for my 2-year-old, "please can I have a cat to chase and wrestle with" Kershach. Not being in any particular rush, I wasn't too put out by this, but I was sad to have to pass by such great cats. (Though they have all been adopted, which is wonderful since older cats usually have a tough time in shelters.)

Now, Drannor (named "Charlie" in the shelter) is also older - just under 8 years. Plus, he was surrendered by an elderly couple who had to give him up because they were moving to a retirement home. I would've expected such a cat to be sweet, but sedate and less-than-playful. But when I met him for the first time, he flopped onto his side to beg for pets. And he played the Odd Couple with a zoomy little 2-year-old cat who had adopted him as an older brother figure. And finally, when I broke out a wand toy, he ran straight for it and leaped in the air like a spry young thing.

I was pretty well snared. But I had my reservations about his age, and I was (as usual) waffling at the prospect of making a big decision, no matter how much I wanted this decision. So I asked

ratzeo to come back with me to the shelter yesterday afternoon to meet Drannor. With

ratzeo keeping me from anxiously over-thinking - and with the added impetus of a couple who was also considering adopting Drannor, which made me realize how sad I'd be if I lost my chance - we decided to adopt him. (The other couple was not put out, as they were considering Drannor alongside a couple of other cats.) Conveniently, the adoption was done by my staff supervisor from my volunteer shift - and we also confirmed that she was the one who performed the adoption when

I was ... pretty surprised/impressed at myself after the adoption, for how calm I felt. I am prone to anxiously rethinking my decisions after the fact, especially for something like this where there is no clear, discernable right answer. But I was so at ease it felt surreal. I was calm enough to name him - though this was pretty easy, because I'd been considering "Drannor" for awhile now. (For anyone who wants to know the nerdy reasons behind this choice: Drannor is the name of a spirit who lives in the head of Nexus, my D&D character. He is an ancient elf and Nexus' guide and teacher. Nexus also met him after Kershach - and Kershach is the party's constant spiritual companion, as Drannor is Nexus'.)

We took Drannor home in his little cardboard carrier, over the course of almost an hour and two bus rides. He was remarkably chill - curiously looking out the holes of his carrier, but mostly quiet and not visibly anxious. (Kershach, on his first trip home, had been somewhat calm but talked nervously.) This held true once we brought him inside. I temporarily shut Kershach into the office and prepared the master bathroom area for Drannor. As soon as we opened the carrier, Drannor pushed his way out and started exploring - and purring as he explored. And any curiousity or nervousness at his new surroundings didn't prevent him from being affectionate. I took the following three pictures in rapid succession, just a few seconds after he came out of his carrier. 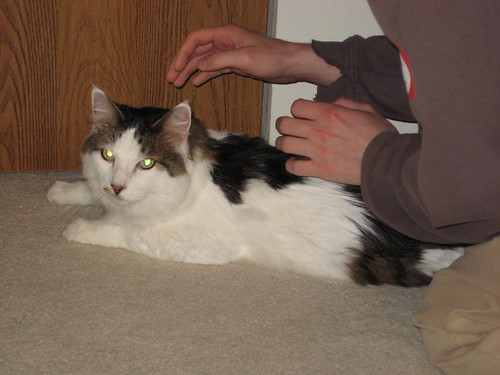 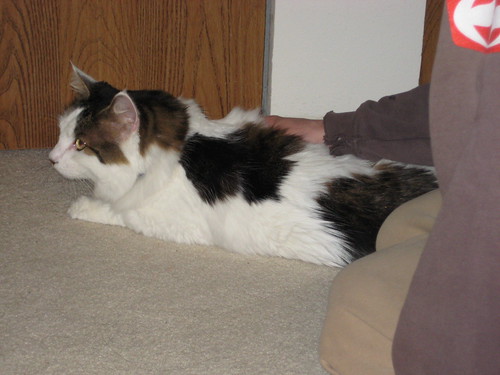 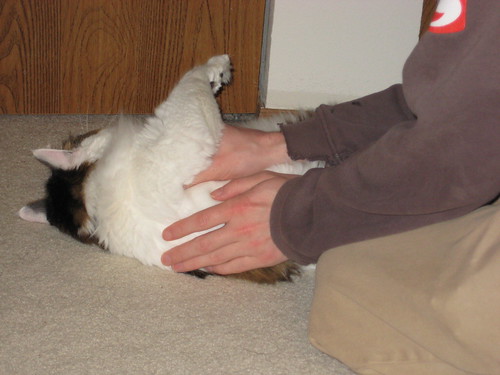 I also took this short video of Drannor exploring and getting pets from me. Nothing too exciting, but this shows his general attitude of the evening.

With how relaxed Drannor was, we decided to go ahead and try introducing him to Kershach, instead of keeping them separated for a night. To the credit of Drannor's courage and Kershach's manners, they approached each other immediately and sniffed politely. 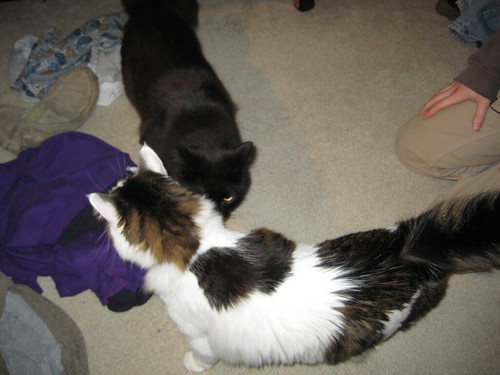 Then Drannor concerned himself more with exploring the apartment. He, after all, had come from the shelter, and had shared the communal cat room with 9 other cats. Kershach, on the other hand, was terribly excited to finally meet another cat (in the year and a half we've had him, he's only seen other cats through windows or heard them through doors). We ended up watching a little train of Drannor exploring and Kershach following right after, trying to stick his nose up Drannor's butt. 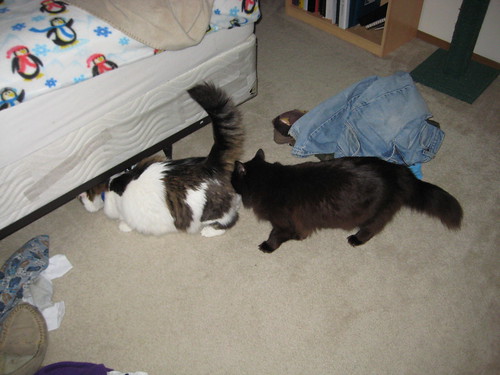 Kershach, however, is perhaps the worst hunter in the world. He followed Drannor around, and each time Drannor turned a corner Kershach hustled after him ... until

ratzeo picked Drannor up and walked a few feet away. Kershach totally lost him. -_-;; He stopped, groomed himself for a second, and then looked around, confused.

ratzeo had to lean down and show Kershach his armload of Drannor. *sigh*

It wasn't long before Kershach tried to play, and Drannor was blessedly tolerant. Over and over again, this cat impressed me with his confident, calm, and friendly demeanor. He allowed Kershach to whap at him, reciprocated with some tentative smacks, and by the end of the night there was chasing and wrestling. I'm 95% sure this is mutually enjoyed play-fighting, on account of the body language (ears forward, fur down, no hissing or screaming) and their behavior otherwise (Drannor left when he was done, but didn't hide or cower; and as the night wore on, Kershach allowed him to pass by more often without pouncing).

Buuut, if any more experienced cat owners would like to provide advice or observations, I'd sure love to hear them. My paranoid cat mama instincts are strained by watching my boys fight.

Though if anyone is unhappy with the wrestling, it would be Drannor and not Kershach. I do think Kershach is really happy to have a buddy. When Drannor discovered the joys of lying on the bed under the fleece blanket, it wasn't long before I found Kershach lying next to him, trying to spoon Drannor from outside the blanket. Here's the photographic evidence, though I'm afraid Kershach tried to make a break for it when I broke out the camera. 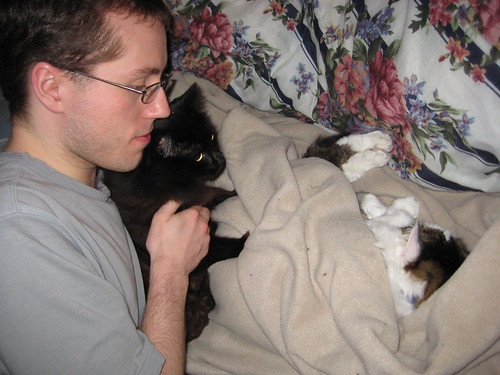 When we went to sleep, Drannor stayed in the bed. Kershach was probably a little jealous; he didn't come up and sleep on me like he usually does. But he was, again, excited - he hopped on the bed, went over to Drannor, and started grooming his head. T_____T Unfortunately, Drannor was either asleep and was surprised when he woke up, or otherwise got tired of it, because he did bat Kershach away. However, Kershach came back within minutes, gave him a few licks, and then politely left him alone.

This morning, the boys have already chased each other and wrestled plenty. Kershach remains excited/jealous, I think, so the fighting might be expressing some of those conflicted feelings. He's also a bit withdrawn, not hanging around me for petting as much as usual. But he is hanging around Drannor on his own volition, so I don't think he's in too bad shape. I've been trying to cuddle and baby-talk him at every opportunity, to remind him that he's still my kitten.

Also, as I predicted, Drannor is already in love with

ratzeo all night for love, waking him up with headbutts and nose-in-the-ears to get his attention. *sigh*

But I got my own moments. Drannor was lounging on the couch, and I tried giving him a kitty smile - a long, slow blink that denotes friendliness. Normally when I do this with Kershach, he looks away or gives a little squint (either I'm not doing it right or he doesn't know what it means). But Drannor met my eyes, slowly closed his eyelids, squeezed them shut, and then opened them again. I think I got a full-blown kitty smile. ♥

So I'm pretty happy with my new kitty. :D There are little things I'm worried about, such as his minimal interest in food. (But, unlike Kershach, he came from a pampered home instead of off the street, so he's not starving like Kershach was.) There's also the usual litter box joy that accompanies the stress of transitioning food and environment. >_> But overall, I'm just happily watching all the newness unfold - seeing the new guy in our home, seeing Kershach interact with a buddy, seeing what Drannor likes/does that's different from what I'm used to seeing Kershach like/do.