I've been on something of an Asian food kick lately. I'm not sure why, exactly. Part of it is nostalgia for my mom's cooking, though my mom (an ethnic Chinese born and raised in Burma) cooks a [DELICIOUS] fusion of Chinese, Burmese, and Indian food - while the food I've been making lately is Chinese, Japanese, and Korean. I think I've just been missing my yellow-girl food in general. Seattle does, of course, have a good variety of restaurants that aren't just standard "American" fare, but the area I live in/can conveniently get to is pretty whitebread.

Unfortunately, I made the mistake of not learning how to cook from my mom as I was growing up. So any cooking skill I have, I developed as an adult by looking up recipes online (and occasionally calling my mom for advice). It's harder to find good recipes for Asian foods on English websites, though, so I haven't been going to my usual All recipes or Food Network. Instead, I'm poking around online and trying to match that info to what I remember, then to what I find in the aisles of Uwajimaya.

The first instance of this was when I bought a package of iriko (dried anchovies) on a whim, without the slightest clue how to use them. I did remember, from living with

peartreealley, that there's a tasty Korean side dish of spicy dried anchovies ... except I don't know Korean, and so ended up just Googling "Korean anchovy side dish" to see what I got. Luckily, that got me to Maangchi's myulchi bokkeum (variations according to how you romanize) recipe, and it was not only easy to make but easy to make well.

I highly recommend it, even to people who aren't too fond of fish - the dried anchovies only taste a little fishy, and when you add in the other ingredients it really ends up tasting like "crunchy." I also made sigumchi namul (spinach side dish) and kong namul (soy bean sprouts side dish) from the recipes here, and made it all into a meal by adding onigiri. Since the side dishes are so flavorful, I made simple onigiri, like using furikake (dried seaweed and sesame seeds, and some flavors have dried fish) instead of a strong-tasting filling.

For anyone else who's interested, here are the food blogs I've been frequenting lately:

Maangchi - I really like her site because she has photographs and videos of the cooking process, and she also has a super-helpful ingredient guide with pictures and descriptions of Korean/Asian ingredients. This is helpful because I'm so new to Korean food.

Use Real Butter - I found this site through

lunapome. She has a lot of Chinese dishes, plus super nice photographs of her recipes.

NoobCook - Her site slogan is "Any Noob Can Cook," which works for me. XD Mostly Chinese recipes.

My Asian Kitchen - I haven't tried any of the recipes here yet, but they look delicious.

Wandering Chopsticks - Another place I haven't tried, this site has mostly Vietnamese but also Chinese and other types of cuisine. 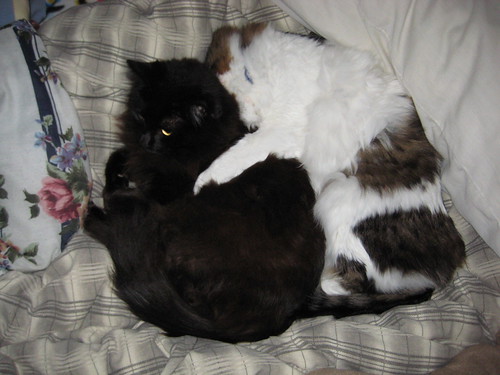